A drone is used to spread pesticide on fields in Hushan, Rongcheng.

It was cloudy on Thursday in Mazhuang, a town in the city of Tai'an, which is a major wheat production area in Shandong province. Rain was forecast for the next day.

Xue Lina, who runs an agricultural cooperative in the town, walked through a large expanse of land used to grow wheat, viewing green seedlings swaying in the breeze.

This year has proved tougher for Xue, 39, than previous ones, as she noticed more vulnerable wheat seedlings when the crop started to turn green last month.

"This vulnerability is probably due to late planting as a result of flooding in the autumn," she said, adding the winter wheat planting in the town was delayed for 20 days.

By taking technical instruction, Xue and her colleagues have been quick to offset the impact arising from late planting.

To improve crop nutrition, organic fertilizer must be spread on dozens of hectares of wheat on days when rainfall is likely.

Mechanization is on hand to help, with two of the cooperative's workers using agricultural drones to spread fertilizer over the wheat on Thursday.

"A single drone can spread fertilizer over about 10 hectares of farmland in a day," Xue said, adding that drones spread more evenly than agricultural workers.

Xue is not the only one whose seedlings have been affected by late planting.

Last year, more than 7 million hectares of winter wheat were planted late due to flooding in Hebei, Shanxi, Shandong, Henan and Shaanxi provinces, according to the Ministry of Agriculture and Rural Affairs. This accounts for one-third of the total area of winter wheat planted nationwide last year, posing challenges to this year's summer grain harvest.

Mainly comprising winter wheat, the summer grain harvest is one of the two major harvests in China－the other being autumn grain, which includes corn and mid- and late-season rice.

The summer harvest accounted for one-fifth of China's grain production last year, according to the National Bureau of Statistics.

As the Russia-Ukraine conflict persists, agricultural experts are worried about surging global food prices caused by many factors, including supply chain disruptions in Ukraine and Western sanctions against Russia. The two countries are among the top five wheat exporters, accounting for 29 percent of the global total.

China is strengthening field management for wheat that is planted late, according to this year's Government Work Report delivered by Premier Li Keqiang at the fifth session of the 13th National People's Congress on March 5.

Central and local authorities in major wheat production provinces have made efforts to promote the growth of vulnerable seedlings a key task for spring farmwork. 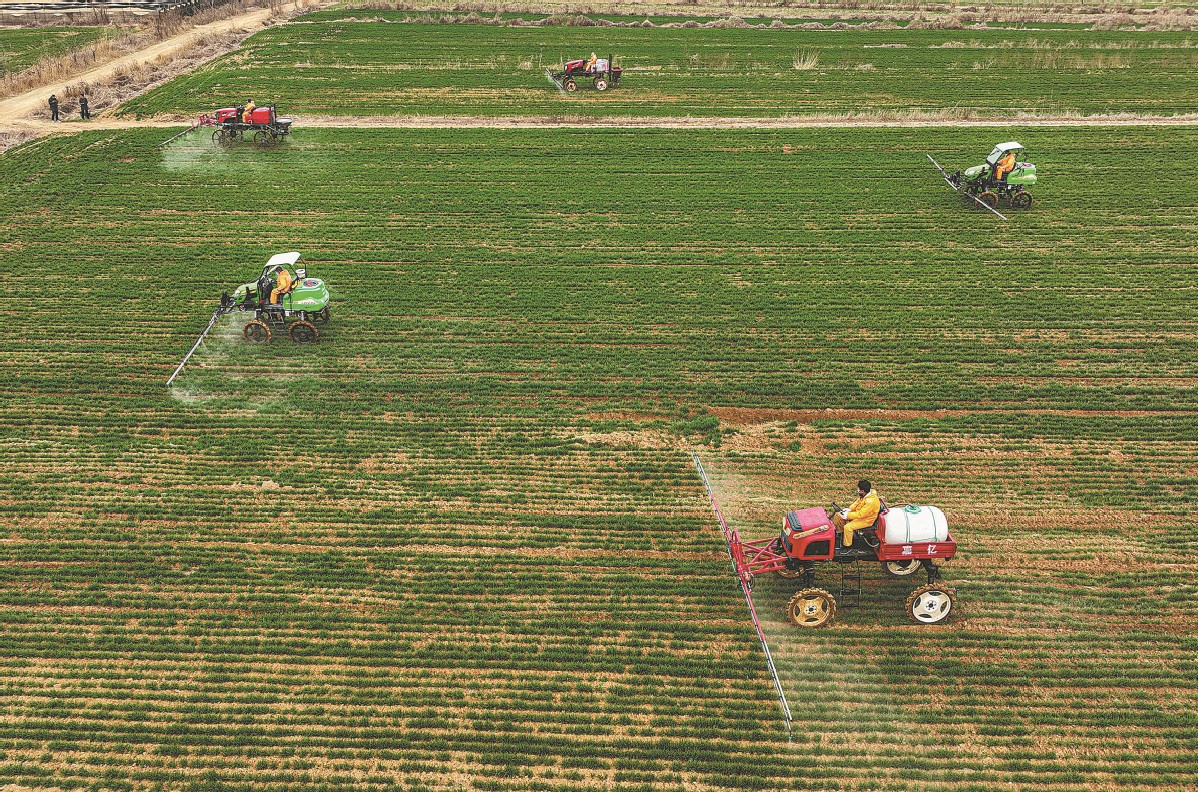 Since last month, experts have been sent to key wheat production areas by agricultural authorities to help farmers improve the quality of vulnerable seedlings.

Wang Fahong, a member of the team of wheat experts at the Ministry of Agriculture and Rural Affairs, said that thanks to prompt efforts, including technical guidance and the machinery used at almost every stage of wheat growing, most vulnerable seedlings have recovered and are being grown in good conditions.

During the past two months, Wang, 60, who works at the Shandong Academy of Agricultural Sciences, has visited most wheat production areas in Shandong to examine seedlings and soil conditions.

"The conditions for seedlings this year are more complicated. We need to provide different treatment measures according to the conditions of the seedlings and soil," Wang said.

One favorable factor is that temperatures during the winter were higher than in previous years, providing sound conditions for growing wheat, Wang added.